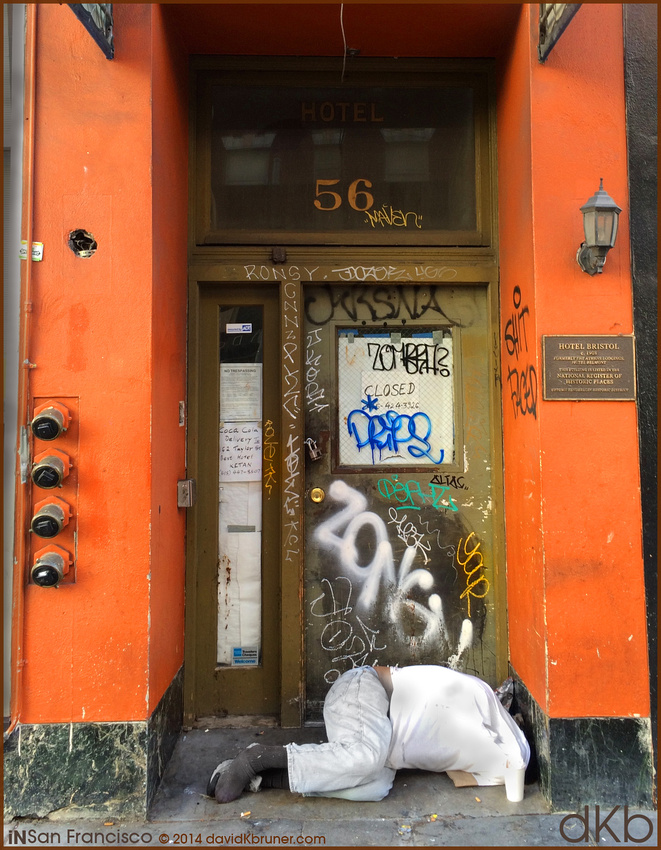 iN San Francisco-i would say i'm not trying to make any personal statements with this photo. I see this more than i think i (or anyone) should. I know this has been asked before (most likely by me). Why, in a country so wealthy? Yeah this is the almost the Tenderloin in San Francisco but i see money wasted here, food wasted there & so on. With the holidays coming maybe we all could keep people like this in our thoughts. There are so many more out there, don't let them fade away!-dKb

Read some strange news about this building, The Bristol Hotel San Francisco-The vibrations are so bad in Room 315 at the Hotel Bristol in the Tenderloin that Daniel Sepeda thinks it's time to bring in the holy water. "I should sprinkle some around and say some prayers," he said. "There are weird spirits here. It gives me the creeps." Sepeda and his roommate, James Bowton, attribute those creeps to Room 315's former tenant, Richard Ramirez. Ramirez is the man police say is the "Night Stalker," a cold-blooded serial killer who murdered people while they lay sleeping and then scrawled satanic symbols on their walls. Ramirez stayed at the Bristol several times during the past two years, according to manager Alex Melnikov. "The people we get here I would call third-class types," Melnikov said. "About 70 percent are on dope. I don't ask a lot of questions." Melnikov said Ramirez left behind a mysterious odor in the room. "It smelled like skunk," said one resident who declined to give her name. "The cleaning man sprayed like hell, but it wouldn't go away." A five-pointed star, a pentagram, associated with devil worship, was found drawn on the bathroom door of 315. Police, who searched the room, took the door with them.--JM